Want to supercharge your confidence and communication skills in a supportive environment? Our members-only program, The C Method Academy is now open for registration until 1 November 2019! Click here for more info and to register! 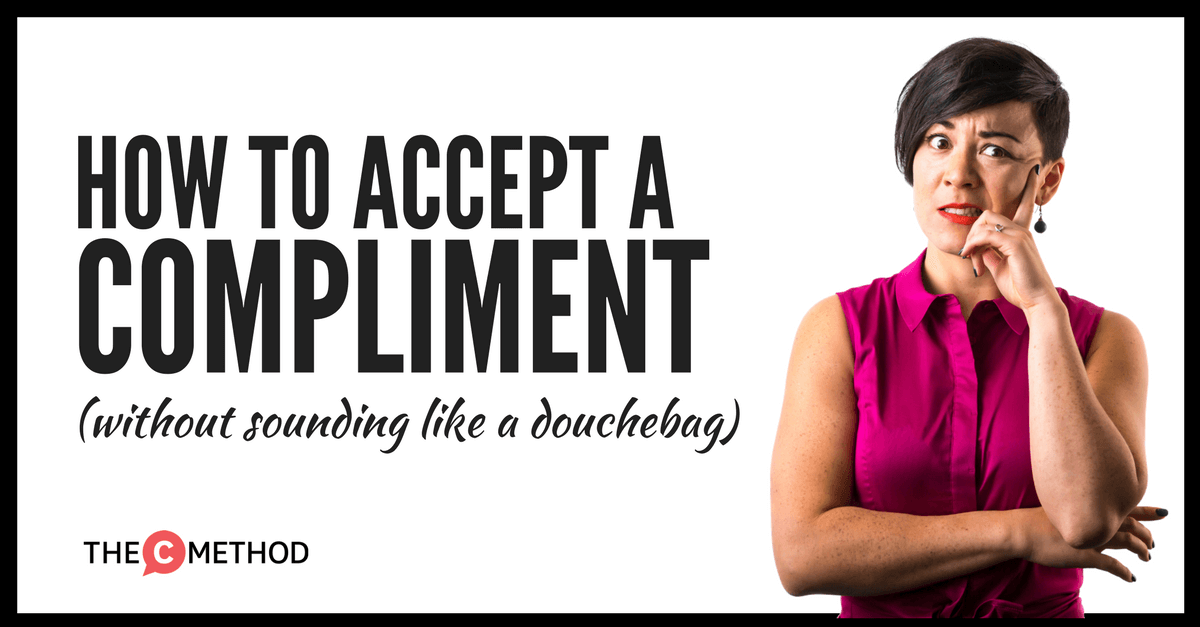 Do you get really awkward when someone compliments you?

I used to. I blame it on my inner perfectionist. Plus, in Australian culture, we tend to believe that accepting a compliment means you have a ‘big head’ or are ‘full of yourself’ – so we deflect, dismiss and talk ourselves down. Rising up above others is seen as a big no-no.

And then I started hanging out with Americans, who do the opposite – they push each other up.

At first, I didn’t know what to say to their gushing comments of “Christina you’re amazing!” and “I love your podcast!” and “You’re the most creative person I know!”

…but after a while, I learned to take it. After all, it felt good! And I started giving more compliments to others (when deserved, of course. I ain’t blowing smoke up anyone’s ass!) 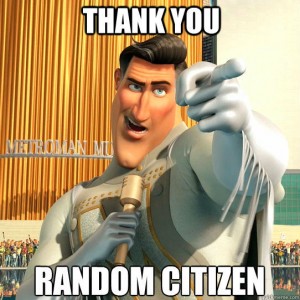 But do you know what happened?

“Oh, it was nothing!”
“Yeah…well, I could have done better”
“Are you serious? But I’m nowhere as good as so-and-so!”

Does this sound like you? If so, keep reading.

Here’s why you suck at accepting compliments:

But do you know what happens when you dismiss a compliment?

1. You reject that person’s generosity

Someone has just gone out of their way to say something nice to you. They didn’t have to do that. Do you think if they didn’t mean it they would say it? (Of course, there are always people who try to suck up to you…but hopefully you can see through it!)

If you say “Oh, no I’m not”, you’ve essentially rejected that nice gesture. Don’t make someone else feel rejected because of your own shitty insecurities. Reward them for going out of their way to say something nice.

Think about it this way: if someone gives you a gift, do you throw it back at them and splutter “Oh there is no way in hell I deserve this! Give it to Mike instead!”? Um, no. ‘Cos that’s just rude. 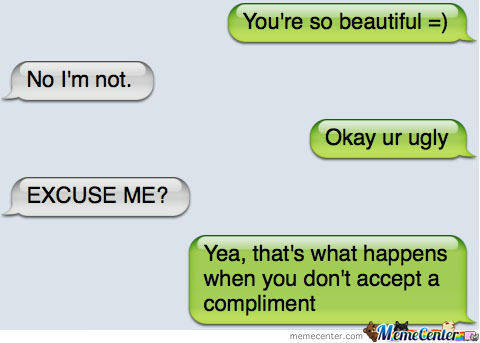 2. You make THEM feel worse about their own abilities

I went rock climbing with a friend who had been doing it for years. As a newbie, I was amazed by his skills. I said “Wow, you are SO good at that!” and he immediately said “Oh, nah, I’m nowhere near as good as these guys”, indicating to some spider monkey lookalikes who were shimmying up a 45 degree overhang – backwards.

Well, if you’re not any good…then what does that make me?? I thought.

You don’t have to be the best in the world to be impressive to others. Remember that your ability is always relative. For example, I may not be a good public speaker compared to, say, Tony Robbins, but compared to the average person, I’m pretty good.

I’ve learned that negative self talk can be really detrimental to our success. The more you talk yourself down, the more likely you’ll start to believe that you’re no good. And if you believe you’re no good, it’s very difficult to improve and succeed.

(Side note: if you’re saying “No I’m not”, knowing full well that you are, but you’re just fishing for more compliments…you need to learn how to be ok with yourself. Seriously. The best way to get approval is to not need it.)

How to accept a compliment without sounding like a douchebag 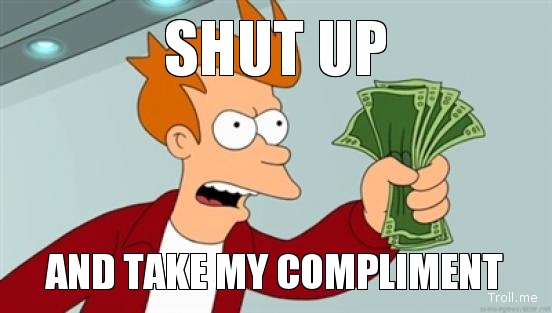 Firstly, resist the urge to say “No I’m not!” and instead simply say “Thank you”.

You can then follow up by giving praise to something or someone who’s helped you:

NOT: “Oh please, it’s old. But YOU look gorgeous!”

COLLEAGUE: “Great job with your presentation today.”
YOU: “Thanks! Sam’s been helping me practice, which made it a lot less stressful.”

DINING BUDDY: “Wow, this food is so delicious!”
YOU: “Thanks! It’s a Jamie Oliver recipe. Isn’t he amazing?”

But the best way accept a compliment?

If you’re really good at something and you’ve worked hard for it, then for f**k’s sake BE OK WITH THE FACT THAT YOU’RE GOOD AT IT.

You don’t have to be a douche about it. There’s a difference between saying “Thanks, I am pretty good, aren’t I?” and “Thanks, I’m really proud of what I’ve achieved.” And if someone’s going to think less of you because you’re proud of an achievement, well, I think they deserve an un-friending anyway.

Here’s how to own it:

FRIEND: “I wish I could play guitar like you. You’re amazing!”
YOU: “Thanks – I practice every day – it’s helped me improve a lot.”

CAR PASSENGER: “Nice parallel park.”
YOU: “YOU KNOW IT!!”

(Ok, maybe you can be a douche every now and again ;))

I strongly encourage you to give it a go. The more you practice receiving compliments gracefully, the easier it will get. And then it will become second nature. And your confidence in your own abilities will grow.

So go out there, own what you’re good at, and say ‘thank you’. You deserve it, rock star!

(Oh, and if you want to further build your confidence when receiving compliments and making small talk, join my free Small Talk Made Simple class. Simply pop your name and email in the box below!)